It’s Greek To Me!

The third graders at Westminster Academy held their annual Greek Olympics last week. Teams of third graders were paired with Upper School students to decorate chariots and work on speeches about a god or goddess who inspired their decorations. Chariots were paraded through the Grammar School, and speeches were presented to the gods and goddesses (seniors) on Mt. Olympus. “Students were able to display the rhetoric skills we work on in class through their presentations,” said Mrs. Newman. Students then partnered with their teams and took to the field for the chariot races.

After the races, all participants celebrated the day with a special Grecian feast in the cafeteria. During the feast, Upper School 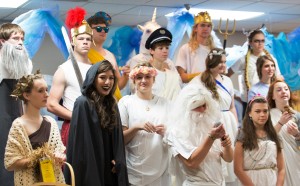 students put on a fantastic play which was written and directed by 10th grader Sarah Teague. The play was about the gods and goddesses of Mt. Olympus, and the final act was a dance from the movie “Grease” (Greece! See what she did there?). Awards were also presented for best costume, best chariot decoration and for the winners of each chariot race. “The partnership between Upper and Grammar school is so sweet,” said Mrs. Newman. “The 3rd graders are now running up to them and hugging them in the halls.” This is event is truly one of the things that makes Westminster such a unique place to receive an education!