Culmination of a WA Education – The Senior Rhetoric Speeches

The delivery and defense of a senior thesis is an important milestone in a student’s education at Westminster Academy. It is a comprehensive and integrative project that requires students to use the knowledge and skills they’ve acquired throughout their education at WA to craft a thoughtful and persuasive argument on a chosen topic. This is an opportunity for students to publicly demonstrate how much they’ve learned about research, reasoning, and rhetoric. The thesis topics represent a wide array of interests, but they all address an issue of depth and significance.

Topics this year include:

The top three speeches, as selected by the Capstone instructors, will present in a public event on Thursday, May 14 at 7:00 p.m. in the Sanctuary. Please join us to hear these seniors and find out who will win the John and Day Hodges Rhetoric Award for 2014-2015. Afterwards, there will be a brief reception for the presenters and attendees. 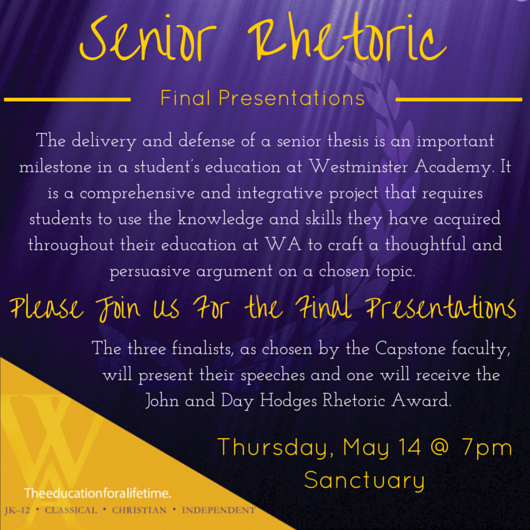