The class of 2024 has spent the last few years studying American history and government. To mark the end of this crucial and enlightening unit, what better place to visit than the very heart of our country? At about 5:00 p.m. on September 8th, the outside of Westminster Academy was swarming with 8th graders frantically toting their luggage and being squeezed relentlessly by emotional parents. Roughly fourteen hours and both National Treasure movies later, we arrived in Virginia and spent two days touring the original colonial towns of America.

It was overwhelming knowing that we were walking in the footsteps of America’s first English settlers. The whole area was filled with history, and you could almost feel it in the air. At the end of the second day there, we boarded the bus for another three hours and arrived in Washington, D.C..

There, we spent the rest of the trip exploring various famed museums, historic sites, and absolutely staggering artifacts that we never thought we would be in the same room as (Magna Carta, anyone?). We stood on the steps of the Lincoln Memorial and watched the sun set behind the Washington Monument, casting it in pink and gold. It was so breathtaking being in a place so jam-packed with national significance.

What made it that much sweeter, though, was how close we all grew over the trip. The laughter, the friendships, and the fellowship mingled with the beauty of the location and enriched it greatly. The colonial Virginia/Washington DC trip is without a doubt one we’ll remember and cherish the memory of for years to come. 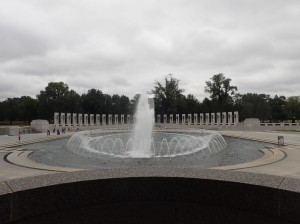 Interview with Braden McElroy
By Kaitlin Baker
Q: What was your favorite part of the trip/favorite place we visited and why?
A: I really enjoyed going to the Museum of the Bible because it changes your perspective of the Bible. I learned so much about the writing of the Bible and what is in it.

Q: What connections between God and history did you make?
A: I realized how much of an impact God had on history and His providence in our country. I don’t think we would have won the war without God’s help. A heavy storm the very night Cornwallis tried to escape? I think this is divine intervention.

The Pool of Remembrance
By Eliana Harris
All is still, serene. Here at the Korean War Memorial, a glassy, tranquil pool roughly 180 feet in diameter, flows gently. Small, sturdy trees are carefully placed at intervals in the red brick pathway, worn smooth from countless tourists looking in bittersweet awe at the marble wall opposite grafted with a sea of faces, soldiers’ faces. 19 men captured beautifully in bronze wade in a field of juniper, armed minimally and fleeing; staring blankly at their pursuers, long gone with the sands of time. All is still. And yet all eyes trail back to the peaceful pool. The Pool of Remembrance is a space to reflect, contemplate, and commemorate.

Though, in our brief stay in D.C., we could stay long enough at the Pool to be satisfied. Each wandering traveler feels an individuality, this pool was made just for them. And yet, they are merely one of many, a small tile often overlooked by the crystal clear water gently ebbing and flowing, silently floating away, another wave taking its place. Perhaps we have been given a taste of the living water Jesus offered the Samaritan woman rejected by the crowd, who was so desperate to belong; to ‘drink and be filled’. Though it may not really be His living water, the Pool may be the rest we need when bombarded by peer pressure, insecurity, college looming too close to be comfortable, one of the few refugees found in this day and age where we can forget, and just be still and KNOW, and drink His living water.

Interview with Emi Joy Matochik
By Ramsey Robbins
Q: What was your favorite part of the trip?
A: Talking to veterans, to hear their stories and become more educated. 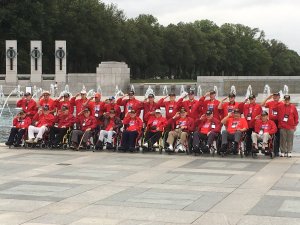 Q: What was one of the veterans’ stories that stood out to you?
A: WWII vet’s daughter said his flight got delayed and the plane he was scheduled to fly on was bombed.

Q: What was a comparison between  history and God that you saw during the trip?
A: God has guided our leaders to make good choices.

Museum of the Bible
By Isabelle Saunders
I think maybe some of us were a little skeptical strolling through the excessive security at the Museum of the Bible. So many aspects of the Bible today have been warped to what the general public prefers to endorse on a whim and therefore the original Word of God has been widely dismissed as a set of guidelines or even a book of fairytales. The Museum of the Bible, however, was a rare and refreshing exception to the status quo; I know that when it comes to Faith, visual impression doesn’t play too monumental a part, but wow. In this age, it’s hard to create something that hasn’t been seen before and that truly astounds people, but an interactive indoor recreation of the city of Nazareth is one of those things. When we walked in and were greeted by ornate fake trees and vibrant replica wine presses complete with deep purple “wine”, we were taken over by this strange sense of giddiness and unbridled amazement. The same breathless appreciation was also taken from the tour in which we literally walked through the stories of the Old Testament and got to see scripture play out around us. In the end, though, none of that would matter if the museum didn’t have firm roots in genuine, Christian faith. And sure, an unbeliever could visit the museum and think “well, what an artistically stunning museum,” but for believers it spoke deeper than that. You could tell it wasn’t just a money-hungry leap for publicity and spicy news articles. And we, even such young and short-sighted believers, appreciated that.

Interview with Alyse Chambers
By Ramsey Robbins
Q: What part of the trip did you enjoy the most?
A: Getting to meet and talk with vets., and no matter how old I get, I will always remember the great experience I had.

Q: What veteran’s story that you heard stood out to you?
A: [One of the veterans] served in the navy with my grandfather , they served together and went through hardships but stayed positive.

Q: What connections between God and our nation’s history did you make during the trip?
A: Throughout history God has always been there to support us and guide us through all the decisions we make.

The Memorials
By Alannah Dormer

All of the memorials we visited were unique in their own ways, but all gave great honor to who or what they represented. The Mountain of Despair and statue at the Martin Luther King Jr. Memorial were very impressive, and gave us the message that what MLK did could never be undone. The World War II Memorial was beautifully laid out, and the golden stars (each representing 100 soldiers who died during the war) made the price of war seem more real to us. The Lincoln memorial was awe inspiring and reminded us of how much Abraham Lincoln did for our country, even losing his life in the end. The Vietnam Memorial showed us just how many gave their lives for our freedom, and how few returned home. The Korean War Memorial’s statues and mural wall made the war seem personal, and helped us understand more about what the youth of America paid during that time. The Jefferson Memorial helped us to respect all of what Thomas Jefferson penned that was a building block in the foundation of our country. And I could not go without mentioning the memorial honoring “the Forgotten Founding Father,” which is the George Mason memorial. It helped us to remember that there were many “behind the scenes” men and women who helped commence a new nation. While I did not mention all of the memorials in this short article, all of them helped us understand a little better about what our country has gone through to become and stay a free nation.