The Memphis Veterans of Foreign Wars (VFW) Chapter 11333  has named Westminster Academy teacher Faith Shaunak as their 2018-2019 teacher of the year. Shaunak was chosen for the honor because of her dedication to teaching and her commitment to the contest. She was among several dozen teachers considered for the award. “Mrs. Faith Shaunak [does] a fantastic job of instilling knowledge into her students,” said VFW Post 11333 committee chairwoman Cassandra Williams.

In addition to the Teacher of the Year award, The Memphis VFW chapter also announced the winners of its annual veteran’s day essay contest, and Westminster Academy students took three out of four of the top awards. There were over 30 local entries from public and private schools, and winners were as follows: 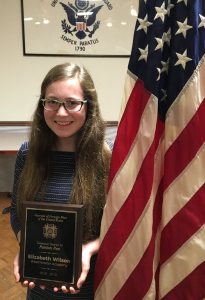 The theme of The Patriot’s Pen contest was “Why I Honor the American Flag,” and The Voice of Democracy theme was “Why My Vote Matters.” Student submissions were judged by a committee based on how well they understood, developed, and presented the theme.

“I had a great time reading and listening to the submissions,” said Williams.

The local winners will go on to compete against other state winners, and if selected again, will advance to the national finals, where they will have the opportunity to earn one of several scholarship prizes totaling anywhere from $500-$30,000, along with an all-expense paid trip to Washington D.C.

Hear Elizabeth Wilson give her first place speech on “Why I Honor the American Flag” at our Veterans Assembly earlier this year.