Question: What goes together like peanut butter and jelly?
Answer: Bow ties and the men of Westminster Academy.

It’s no secret that the men and boys of Westminster Academy love their bowties. So, it was a “no brainer” when Mrs. Kim Dougherty, WA fifth grade teacher, asked her sons if they would be interested in being models for the Memphis based bow tie company, Mo’s Bows. Only last week, Mo’s Bows issued an advertisement on social media looking for local “graduates” for an advertising campaign. Will Dougherty, WA rising seventh grader, and his youngest brother, George Dougherty, WA rising third grader, responded to the city wide search for models. The next day, both brothers received an email that they were chosen to represent Westminster Academy in a photo shoot for Mo’s Bows. The Dougherty brothers had a great time meeting the fourteen year old CEO, Moziah Bridges. 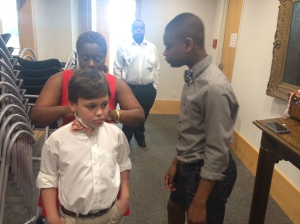 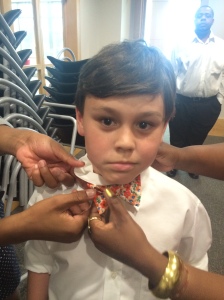 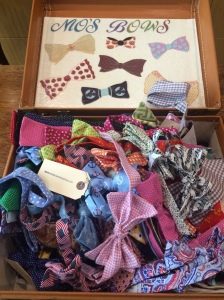 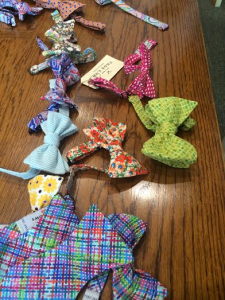 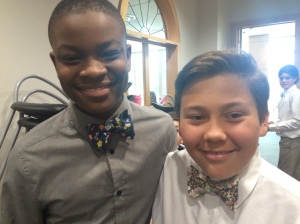 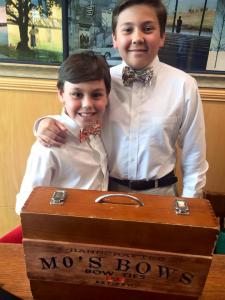 Mo’s Bows’ story is very compelling. After trading bow ties for rocks on the school playground, Moziah’s strong fashion sense led him to start his own company at the age of nine. With the help of his mother, and retired seamstress grandmother; Moziah began selling bow ties on his website (mosbowsmemphis.com) and in Memphis retail stores. His colorful, handmade ties quickly made an impression on major networks, and the young fashion mogul made rounds on The Steve Harvey Show, The Today Show, Oprah Magazine, Good Morning America, and eventually, Shark Tank In addition to being featured in various international documentaries and publications, the teenage CEO took his fashion expertise to a new level in 2015. Moziah served as the fashion correspondent for the 2015 NBA Draft. Mo’s Bows are sold at Neiman Marcus in Atlanta and North Carolina, Daymond John store in Las Vegas, and at the Baha Mar Resort in Nassau, Bahamas. Mo’s Bows are sold throughout Memphis in various stores as posted here on the Mo’s Bows website: https://www.mosbowsmemphis.com/where-to-buy. The Dougherty boys were gifted one awesome bow tie from Mo for their participation in the advertising campaign.