The Tennessee YMCA Youth in Government Program is an annual conference designed to offer high school and middle school students hands-on experience with state government. This year a record number of students participated in Tennessee with nearly 2,500 students in attendance. Students are given the opportunity to participate in and see first-hand the basics of how government works.

In middle school, student teams of one to three members, each write a bill and present it before a committee of their peers who may ask questions or comment on the proposed legislation. The goal is to have the patron’s bill pass the general assembly.  Each committee votes on the legislation, with the best bills going on to the General Assembly after lunch.  The patrons whose bills have moved on will have a chance to present and defend their bills before the entire assembly. The entire assembly then votes according to the following criteria: does the bill affect all or most of 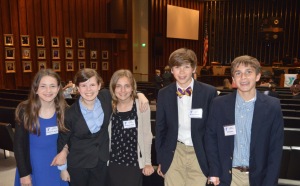 Tennessee, is it “doable,” was it well written and in the proper format, and were questions and objections handled to the satisfaction of the general assembly.  If so, the bill is passed by a majority vote.

Westminster Academy students distinguished themselves with an outstanding performance.  Four of the seven bills to make it to the general assembly were from WA and all were passed by the assembly. Moreover, two of our bills received “Best Bill” accolades.  Four of our team members won “Best Delegate” honors.

The bills that passed were written by the following teams:

We are so proud of our Westminster students!